Following on from the Evolution of a MFR and then the subsequent Theoben Rapid LH Block I was lucky enough to come across yet another genuine Theoben Left Hand block. I had it in my mind for something different, however tempting building another MFR was. I was then offered a genuine Impact Air GSX 100 cylinder along with the block.....hmm....I thought that could have some potential. Deal done. 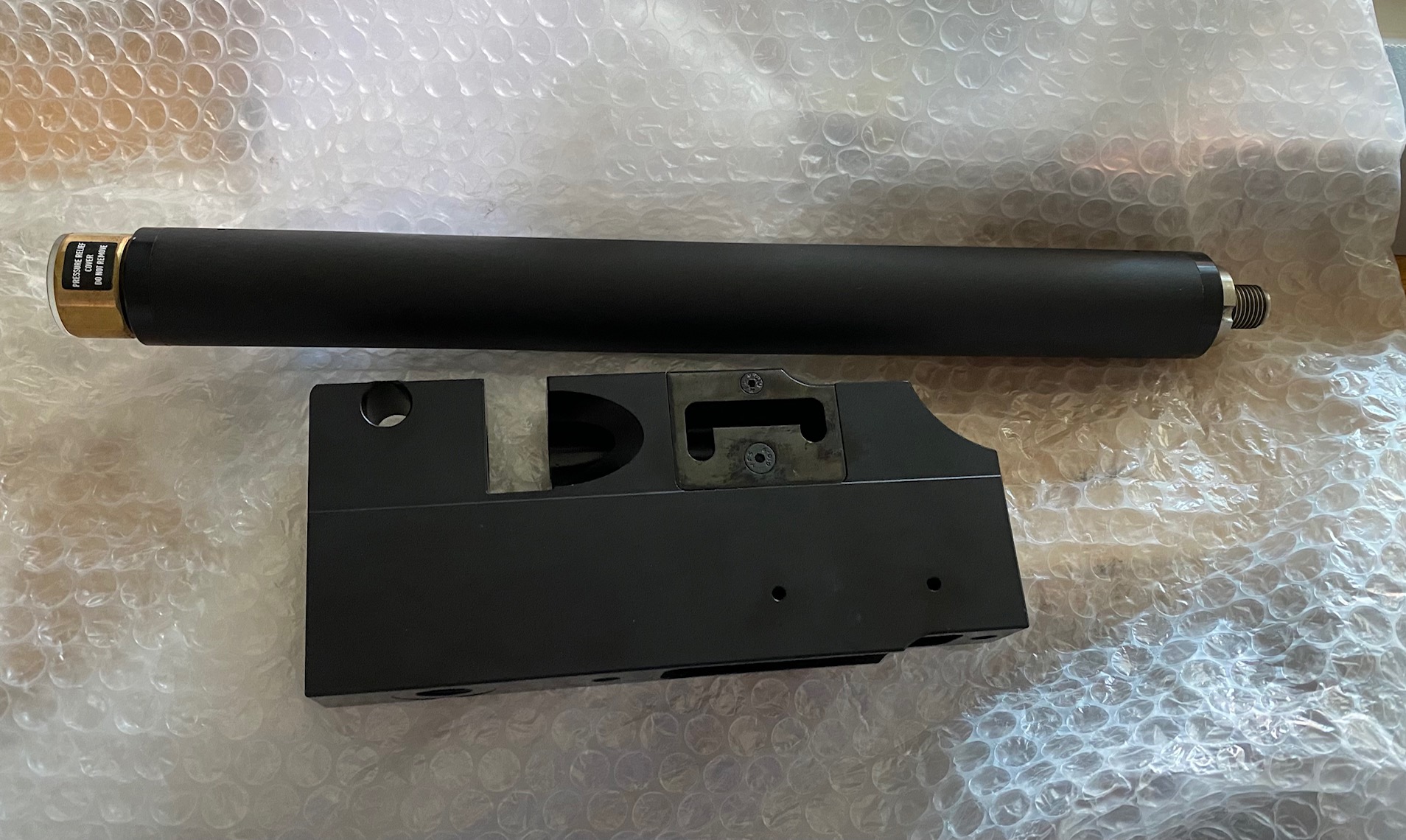 Its becoming quite normal now when bare blocks arrive to talk to Dr Bob and Kev G who sorted me out with the internals and new reg (the fact I found another reg in the shed 4 days after is neither here nor there :facepalm: ....I like shiny new things). Building a block out from scratch is certainly not a cheap way to go and gives an understanding of why even average blocks can fetch 400 to 500 on certain sites. 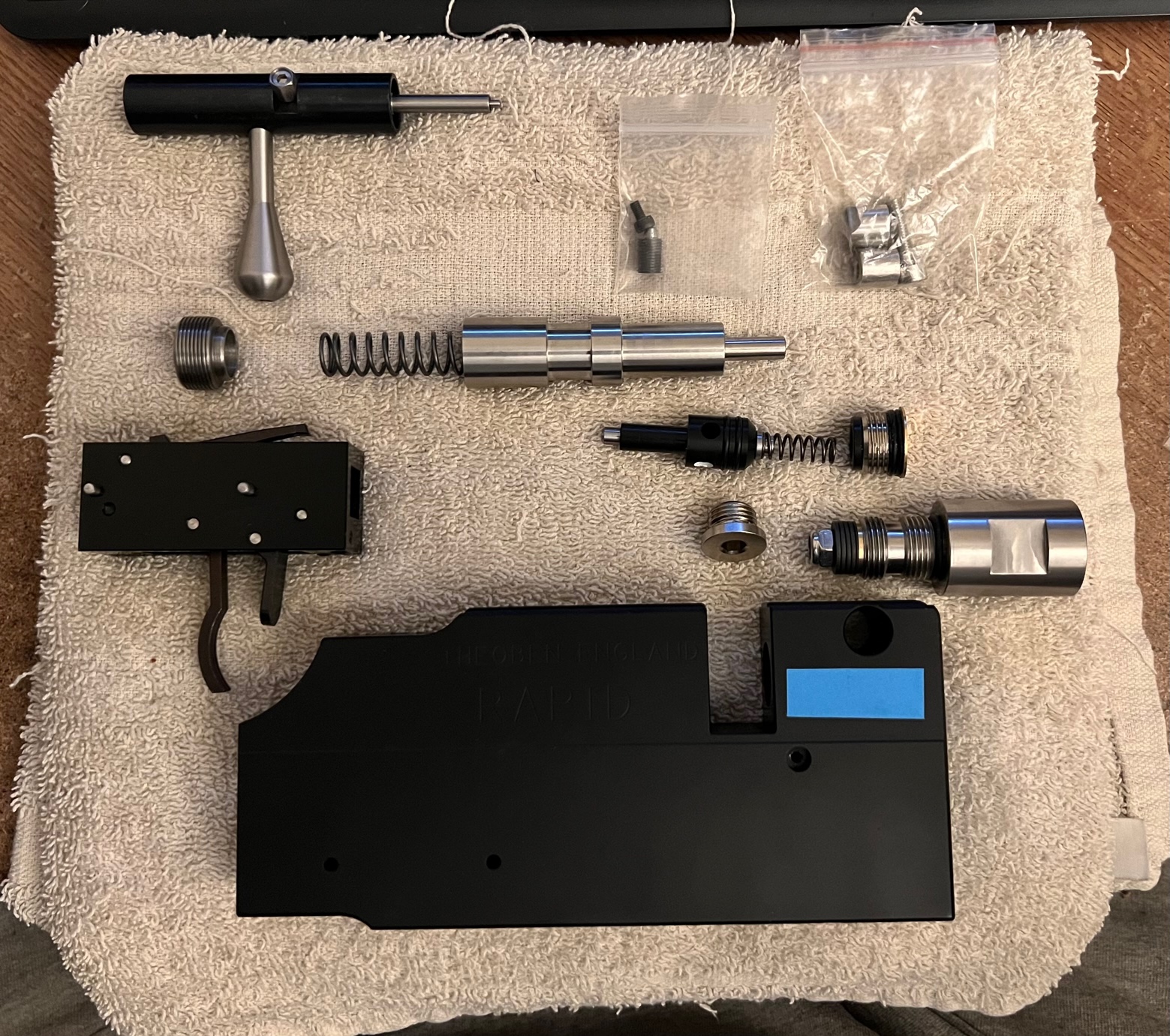 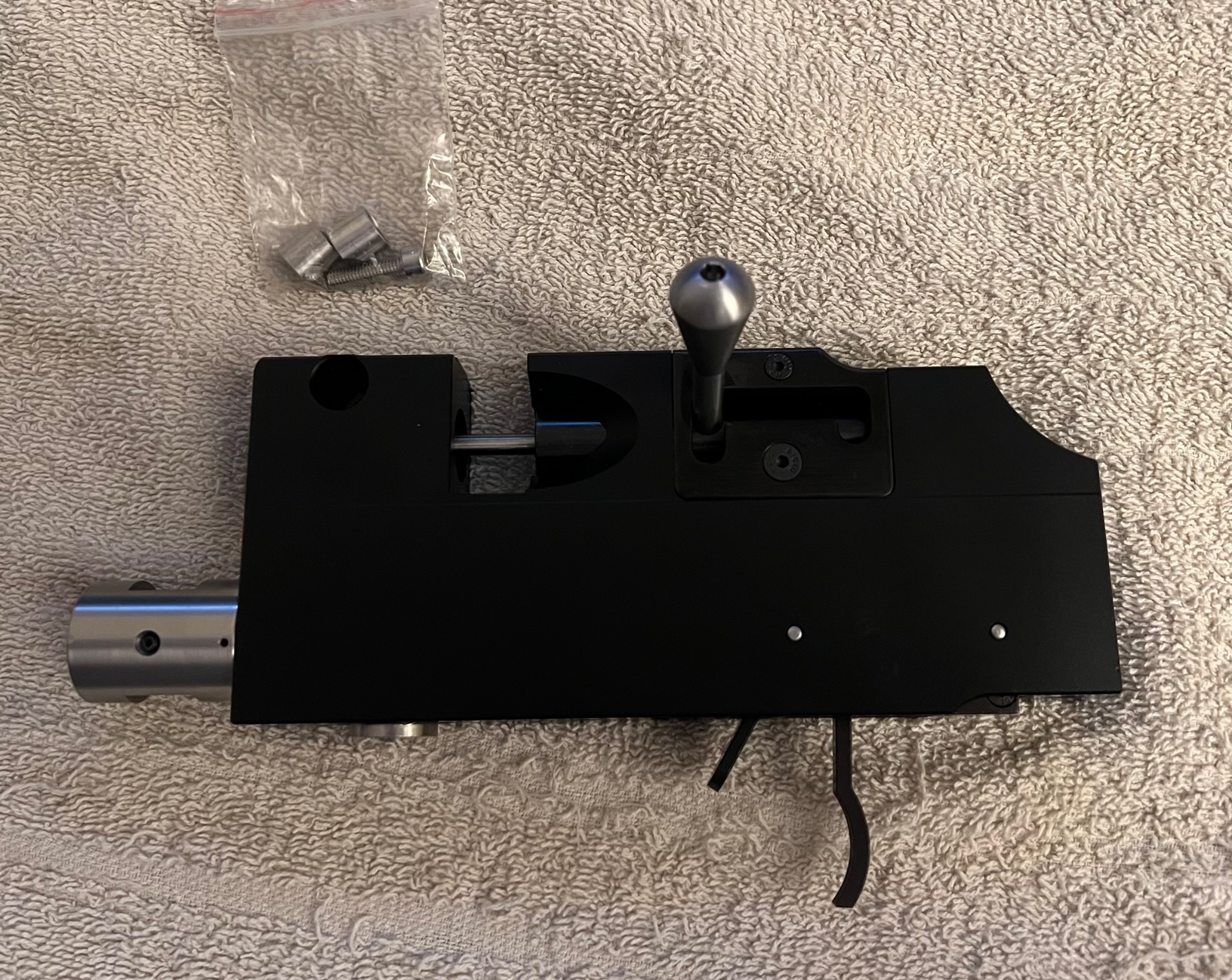 So once the block was built up it was time to think about the other bits and pieces.

For the barrel I had 2 (or 3 or 4) options. First up was the EV2 barrel machined for a rapid block which I acquired off @32:1 a while ago, and its been sitting around just waiting for an opportunity.

The second option was to machine up an old BSA barrel, which was part of a batch discovered by our own intrepid explorer @32:1 on one of his excursions into weird RFD's. This could also be a perfect time to test it out.

The third option, and the most recent was to acquire an original smooth twist barrel off Ben Taylor - this is currently being machined up as we speak

The EV2 barrel fitted and the BSA barrel above......

So mostly sorted, thoughts turned to the stock. I was going to give it a run out in a spare MFR stock I have...but it didn't fit.....so that plan was scuppered. A few wanted adds for a GSX100 stock didn't yield any fruit, so I went to customs stocks and ordered a CS700 - rosecap, stippling and with trepidation I went for a select stock. I also chose not to have the hole in the bottom of the stock which is usually there on the standard GSX100 for the quickfill. As the cylinder has the MFR reg it can come off easily enough and hopefully with 60 odd shots its enough for what I need it to do...plus its different. I may regret it with days on the range, but there you go.

The stock turned up and I tried it with the action...I like the stock but I can't help but wonder if a normal stock would have been equally as nice...

The intention was to give it the first run out last Saturday, however I made another purchase last Sunday and that kind of stole the show and took all my time up.

It currently has a Bushnell Elite 3200 on top & the EV2 barrel fitted, and I must say it suits it perfectly. The only think left to do (apart from shoot it) is to give the stock some oil. A quick rub down to get rid of whats there and then a few costs of....I haven't decided yet....maybe one of Alkanet and then some M&M love from @mikeyhall1 as I haven't tried it yet

A big shout out to Chris (32:1) for his knowledge (and taking the pee), Kev G & Dr Bob for the internals & reg and finally Chris at impact for the initial purchase and a bonus of an original GSX100 trigger guard.

I do not need another left handed block....well, thats what I tell myself...but I do have a few spares left over......hmmmm I wonder if a third will come along!

Thanks
Tim B
Top

Does look nice mate, really nice, but I still say it needs a nice shroud

Post a few pics of the smoothtwist when you get it back please - I have a few of them sat here in a box.

Someone has been mixing and matching then

Sorry for the cryptic code, that should rtead - I did see Impact advertising a block the other day and the condition is 7/10.
Top

Petrified Shrimp wrote: ↑Tue Mar 08, 2022 11:31 am
The third option, and the most recent was to acquire an original smooth twist barrel off Ben Taylor - this is currently being machined up as we speak

Here's a couple of pics of the Ben Taylor Smoothtwist I just machined up. Just slip a bit if 18mm Carbon over it and we are all good

Grouping is looking good. Johhny is taking 5 machined up barrels to the club tomorrow to properly test.

I'm waiting for mine to be machined, but to be honest I have so much stuff to test that its going to be a while before I can test it anyway....

Look forward to the results

Look forward to the results

Tested 5 of them, perfect at 30 yards, 5p sized groups